EDITOR’S NOTE: Once in a while I come across an Econoline that just hits the spot. A cream puff. A sweetheart.  We've all seen 'em. And when Rodger Will sent a shot to our Facebook page, I to know more, I asked its owner if I could do a Vinvanco "Twelve Questions" post about this gorgeous Econoline Panel Van. Rodger Will agreed. As we soon discovered, Rodger is new to the van scene and looks forward to meeting more vanners this year in Milford, MI when he takes his van to the Baker's Annual Meeting of the Earlies event. Without any further adieu, let's get this #4 edition of our twelve questions series cranked over in celebration of the new year. 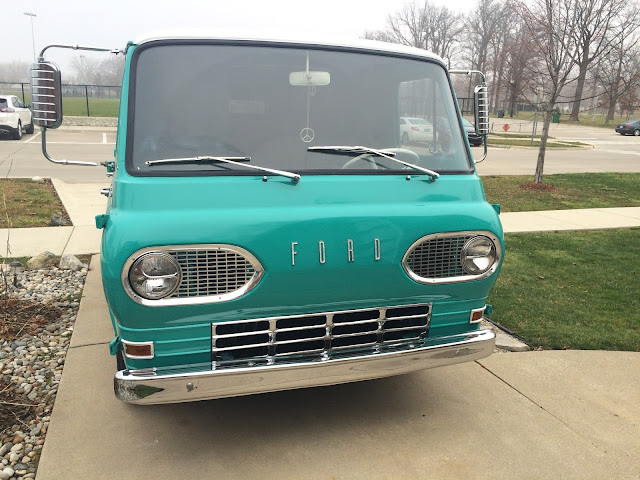 1. WHAT'S THE STORY OF YOUR VAN, RODGER? HOW DID YOU FIND IT AND WHAT CONDITION WAS IT IN?

I live in the Detroit area and work for Ford Motor Company. My current collecting passion is old 2-stroke pedal mopeds and motorcycles, and I use a 1994 Ford Ranger to haul them around to collector events. Many of these events are in areas that would favor a van, for locking bikes and tools, and occasionally for a place to sleep. One day on the way to work, I saw a 1963 E100 van for sale at a body shop. It was a runner, but needed glass, bodywork and paint.  I was reluctant to embark on yet another project, so I passed.  However, I kept watching eBay and craigslist for E100 vans. A few weeks passed and then this van, a very early 1965 E100 popped up on craigslist, and I made a deal.

2. WHAT MODIFICATIONS DOES YOUR VAN HAVE?

I just purchased the van. Its second owner restored it over 20 years ago. It was originally a flower delivery van from Harbor Springs, MI. The van was pretty solid, with 45,000 miles, but showed typical wear. 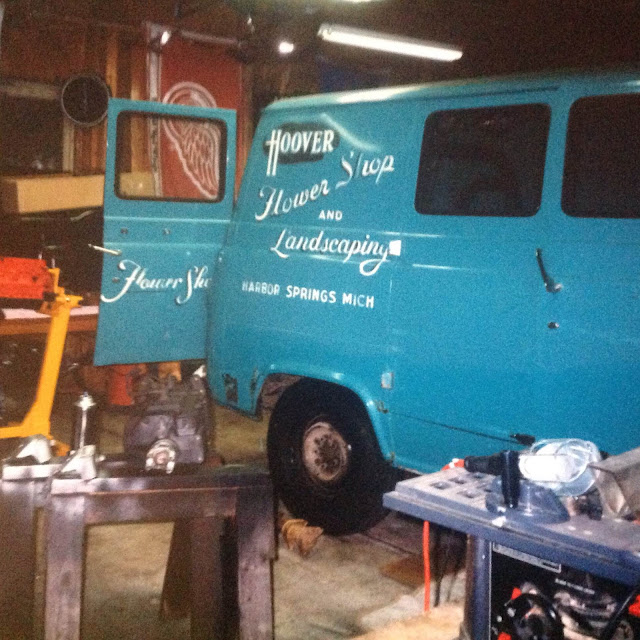 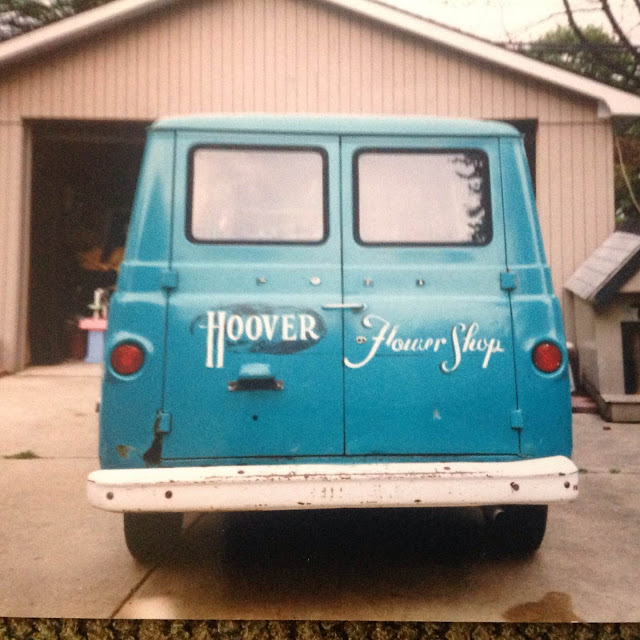 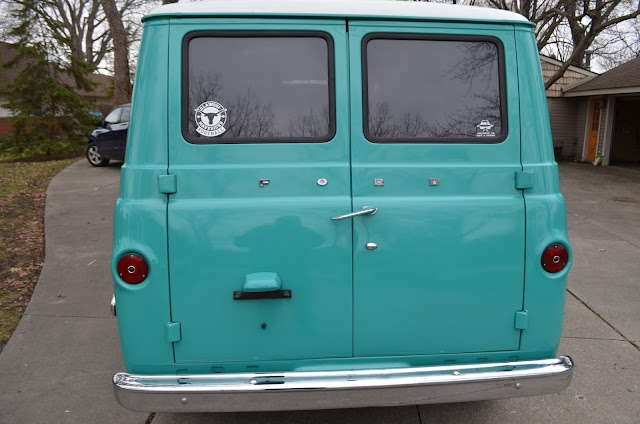 The previous owner started the restoration with a goal of keeping it as original as possible. The main modification was to encapsulate the under body with an industrial coating to prevent future rust, and to line the inside floor with Rhino-liner coating.  Also, a custom exhaust header was made, and a dual right side exhaust was added. 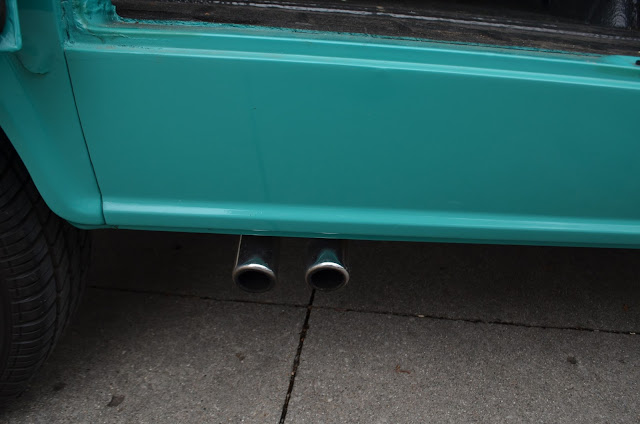 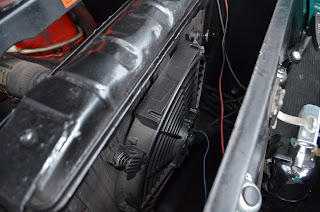 An electric cooling fan was added for parade duty. There are a few cosmetic modifications, like a white roof, seat belts, chrome bumpers, blue dot tail lights, deleted vent windows on the front doors, 2 school bus seats, and a removable center console and stereo.  Also, the rear suspension had a shackle kit installed to slightly raise the back end.  All of the original parts, including taillights, window doors, steel wheels, and dog bowl hubcaps came with the van. 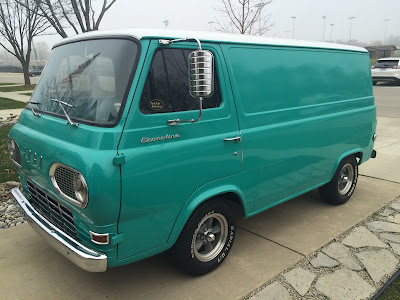 The restoration done 20 years ago also included an engine rebuild to allow unleaded gas to be used.  All suspension and brake components were replaced including steering, kingpins, and brake lines. The paint was the correct Caribbean Turquoise, but a white roof was added. The interior was painted where needed, including the dash. 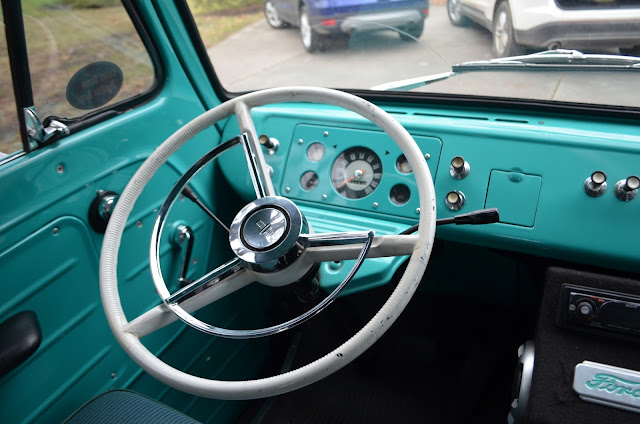 3. DID YOU CONSULT WITH OTHERS WHO HAVE OR HAD A FIRST-GENERATION VAN BEFORE YOU BOUGHT YOURS?

I did a bit of online research, but did not engage anyone before the sale. Now, I have found a Facebook group, and some other sites like econoline.org to get advice and information. 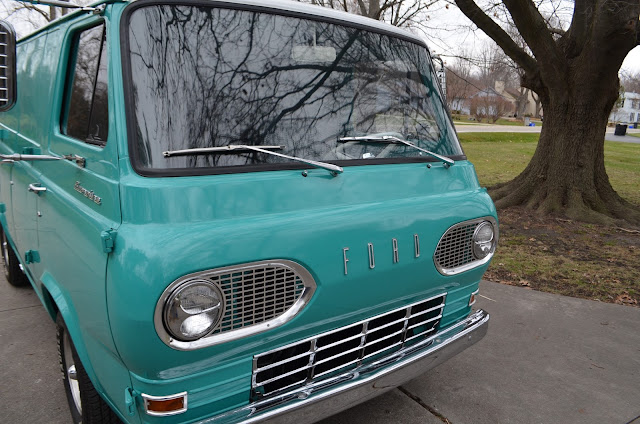 4.  WHAT HAS BEEN THE HARDEST PART OF OWNING A VINTAGE VAN? 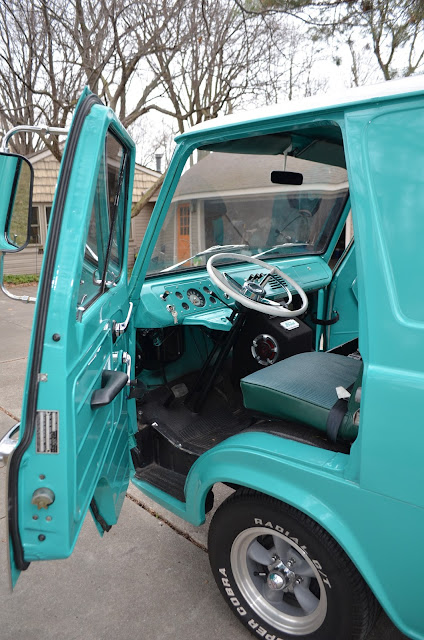 I'm still in the honeymoon period, I've had no issues aside from finding winter storage.

5. HOW WAS YOUR ECONOLINE’S RIDE HEIGHT ACHIEVED?

The rear shackle kit slightly raised the rear, but the rest is stock suspension. 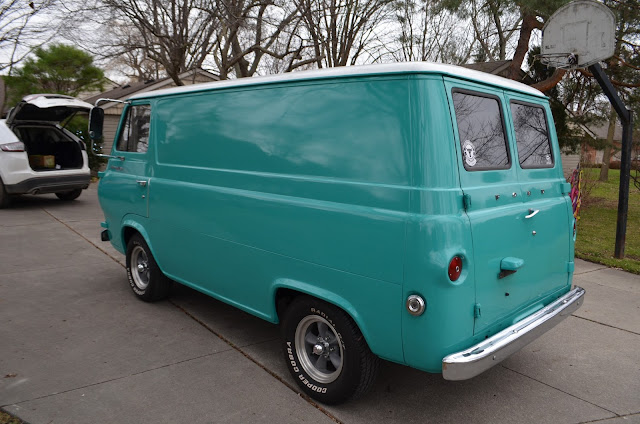 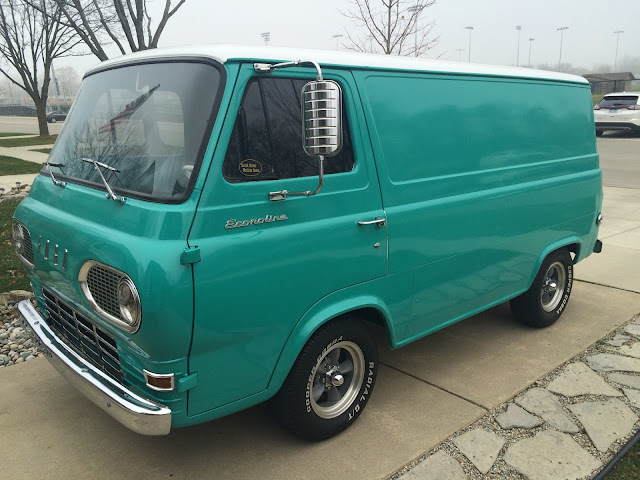 6. I FIND THE PAINT ON YOUR VAN STUNNING. HOW DID YOU ARRIVE AT THE COLOR OR WAS IT PURCHASED WITH THAT PAINT? 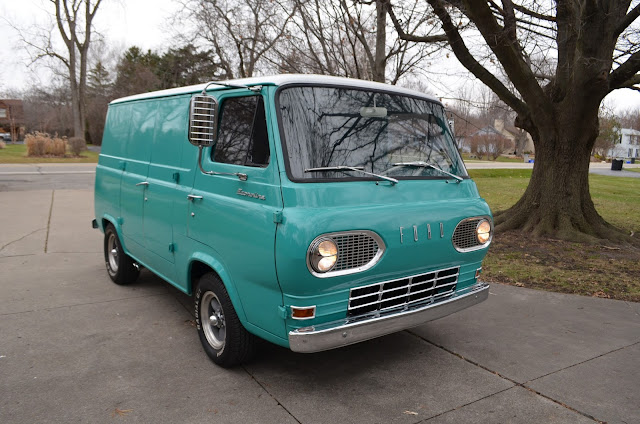 I bought the vehicle this way.  It’s a 20-year-old driver-grade paint job that has worn well.  There are a few areas that need touching up due to age, but I think it looks great.
It’s the stock Caribbean Turquoise, with a white roof.  As you can see by the old restoration photos and the build plate, it is the stock color. 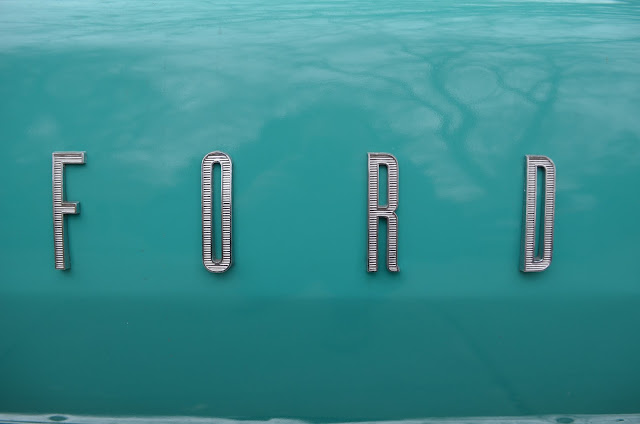 7. YOUR ECONOLINE ISN’T HEAVILY MODIFIED -- LOWERED, MURALED, PORTHOLED OR CB EQUIPPED. AND YET IT’S SUPER TASTY. IS THAT BY DESIGN? 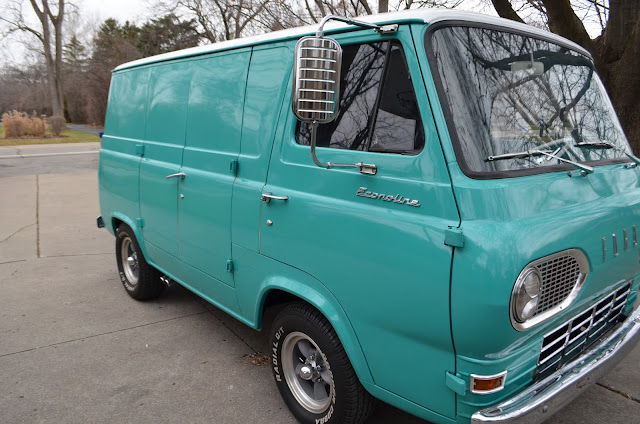 I love stock looking bikes and classic mid-century design, and this van embodies this. In back, there are 2 school bus seats, but I plan on only running the small single seat in back to give me more bike storage space. I need to design a tie-down system in back. 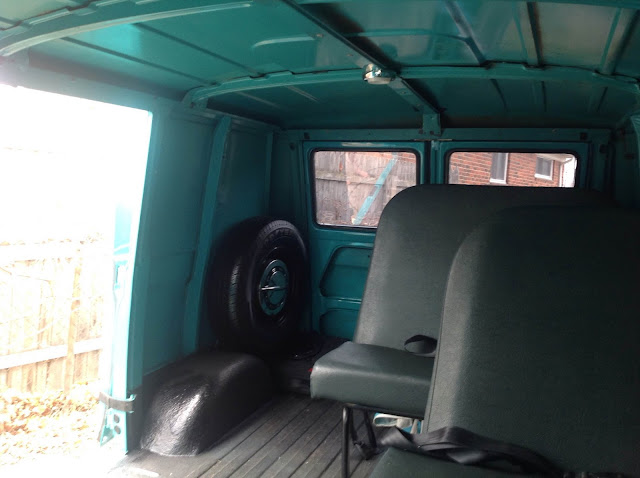 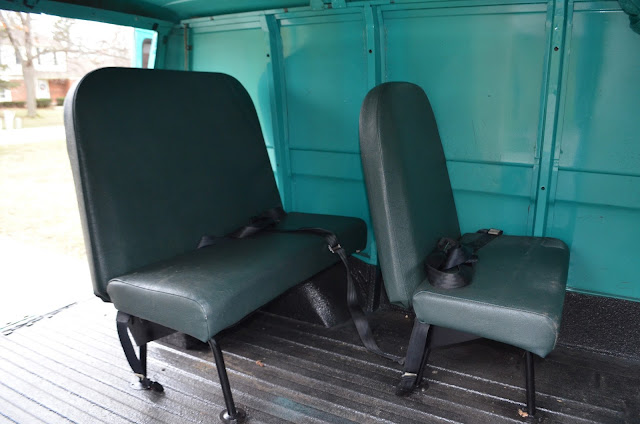 Also, I plan on alternating the stock wheels and the American Racing wheels depending on my mood. 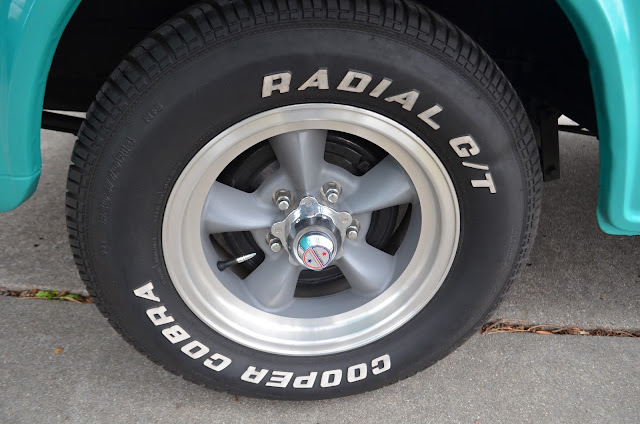 The stereo is a great example of how I like to keep things modern, but without having to cut the dash or other sheet metal.  It’s an older Sony CD head unit. The stereo and front speakers are housed in a custom console that is removable. 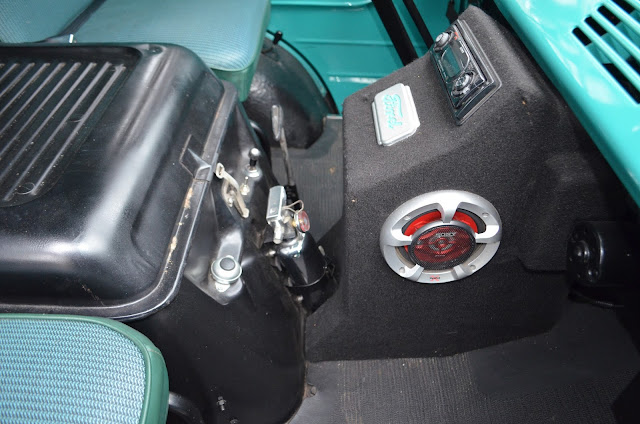 The rear speakers are in kicker boxes that are plug and play. 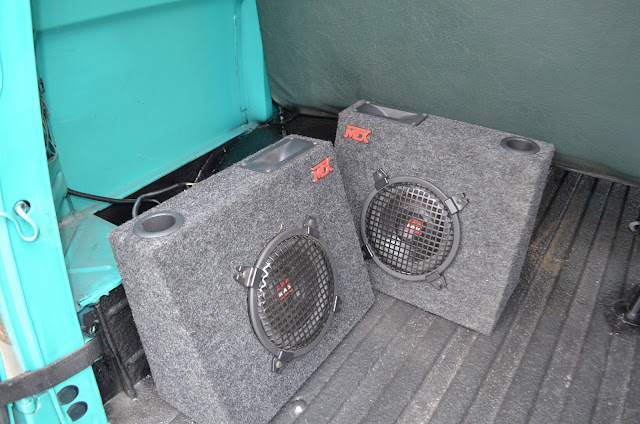 8. I HAVEN’T SEEN THE INTERIOR, OTHER THAN THE FRONT CAB.
IS THE REST OF THE INTERIOR CUSTOMIZED?

The only interior modifications are the seat belts, and 2 school bus seats in back, a single and one a double. I plan on making those removable, and adding some retractable tie down anchors for bikes.  It’s a very stock van. 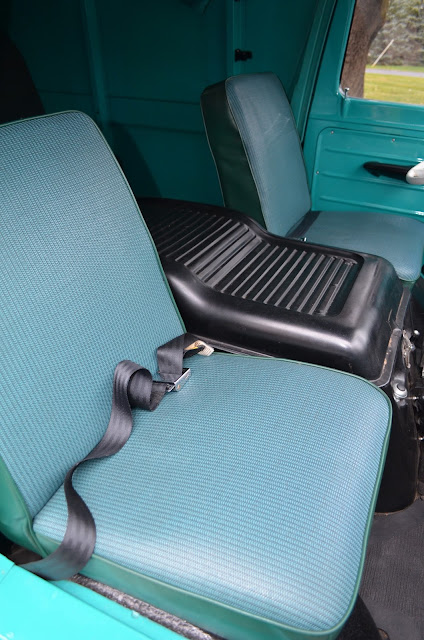 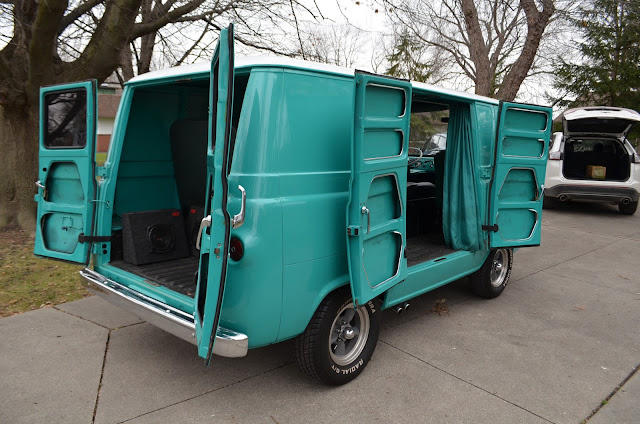 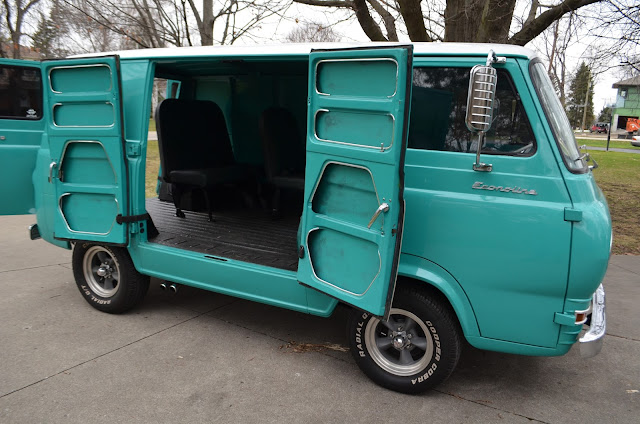 9. ARE YOU PLANNING ANY ADDITIONAL CHANGES?

I plan no other cosmetic changes, but I am probably going to put a Borg Warner overdrive transmission in it to make highway cruising more enjoyable.

10. WHAT DRIVE TRAIN ARE YOU RUNNING? WHAT ARE THE PLUSES AND MINUSES? 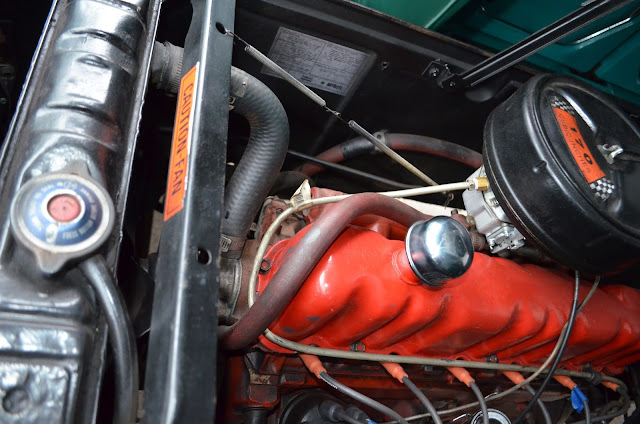 It’s the 170, but bored .30 over during the rebuild.  The transmission and rear axle are stock, but I plan on adding a Borg Warner T-86 with an R10 overdrive. These vans are geared very low, and I plan on driving the van to and from moped and motorcycle gatherings across many states. Lowering the RPM’s on the expressway with an overdrive would better accommodate long distance travels.

11. WHAT SIZE RIMS AND TIRES ARE YOU RUNNING AND HOW IS THAT WORKING OUT FOR YOU? 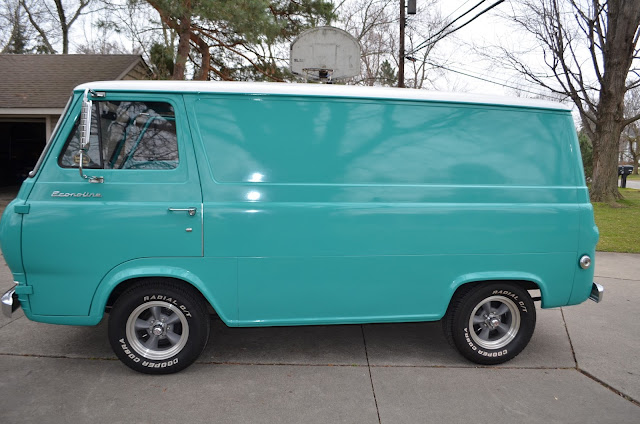 I actually have 2 sets.  The van currently has 14” American Racing wheels with 225-70R-14 Cooper Charger tires.  The other set of wheels I have are black stock steel wheels with the factory bias ply tires, with white and red dog bowl hubcaps.  I plan on replacing the old bias ply tires with black wall radials of some type. I also have a set of chrome and black dog bowls, which may work better with the chrome trim.

12. IF YOU COULD DO ANYTHING DIFFERENTLY ON YOUR VAN’S BUILD, WHAT WOULD IT BE?

I’d have all the locks share a common key. Otherwise, it is exactly what I was looking for. I love the color.  It harkens back to a time where American automotive design was the standard of the world. I have a friend who is a stylist for one of the Detroit 3, and she was blown away when she saw it. [EDITOR'S NOTE: So were we Rodger, so were we. ]

We'd like to thank Rodger Wills for taking the time to share his beautiful Econoline with us. If you know someone who has a nice early van that they’d like to have featured, send us their contact info. In the meantime, Keep on Vannin’!

A RARE FIND FOR VAN FANS

Those who know Debbie and I can attest to the fact that we love picking. Yard sales, estate sales, no pile of junk is safe from us. We're constantly finding cool stuff to embed in shift knobs for our hotrodshiftknob's web store. Cool vintage brooches, old Ford, Chevy and Dodge memorabillia. The other day, we tripped upon something really cool in the garage of someone who must have been a liquor rep. We unearthed a big ol' stack of drink coasters from an old ad campaign for Canadian Club. What made these particular coasters a real find is the photo and the line that appears on a non-recipe side. A young dude in beach trunks is flanked by two young ladies. The line reads, "Your Dad Had A Van For A Reason".  The guy selling these had no way of knowing that I own Vintage Van Company. But he did know that I really dug these coasters. I asked him what he wanted and it was a lot more than I expected to pay. Then I realized. I didn't just want these coasters. I needed them for my van fans. I needed to offer these puppies in my store. So I bought 'em hook line and sinker and assured Debbie that vanners would love 'em. The jury is still out. Feel free to prove me right.
Posted by HouseOSpeed - www.HouseOSpeed.com at 9:54 AM No comments: