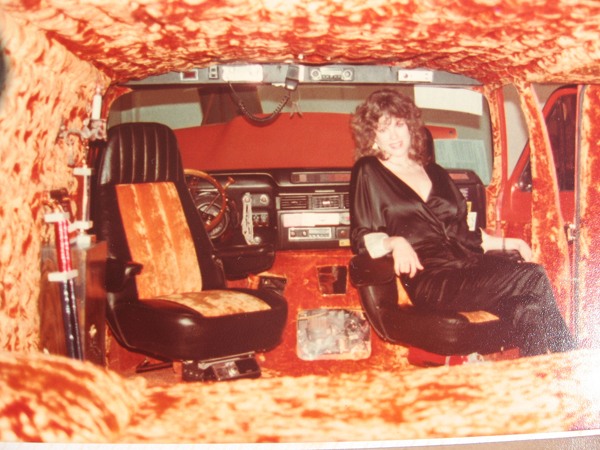 photos: Dennis Dahle
In a perfect mash-up and filed under the “Shit We Love” category comes an email from Nomad Dennis Dahle. Turns out, Dennis was butterfly-collar-deep in the Florida custom van scene in the late Seventies/early Eighties: ISCA shows, Playboy Playmates, hotel room parties, van parties, parking lot parties, party parties…
And he had the wherewithal to snap a few photos of what was going down when he ran into the one-and-only Candy Loving.
Now, we’re not only big fans of Playmate Candy Loving, but we’re also old enough to remember the custom van movement of that era. We were stoked on ‘em in the same way we were stoked on KISS: it was good theater, son. And while we’re not totally convinced that a new build retro custom van is the right thing for the AUTOCULT headquarters parking lot, we do love the theater of it all.
And here’s a good example of why: Dennis was good enough to jot a few lines down about what it was like in those hazy, bong-water-in-the-shag-carpet days of vanning…
“Photos taken in Ft.Pierce, Fla.’74 Dodge van powered by a ’70 (balanced) & blueprinted 340, (estimated) H.P. 400, a Fairbanks Racing 727 Torqueflite trans, 3K stall converter, Mopar 8 3/4 rear with 4:88 for strip & 3:23 for street. Ran 14.20 @ 105 mph. & weighed over 2 ton. Owner-built engine & interior. The interior consisted of 26 yds. of orange crushed velvet & 1382 real buttons. This I know for a fact as I made them all. The upholstery shop refused to do it and pointed me towards the button machine. Exterior was 7 coats of Hemi iridescent orange, gold pearl, candy apple tangerine flames. More gold pearl, then cleared. It was bright in the sun!!!
After the show in Ft. Pierce, it was party time back at the hotel. Candy & her handler/bodyguard/stud for the evening. Bob & Cindy Brazen from Miami (who showed a ’67 Datsun pro street p.u. that scared the crap out of me on a test run. It was bad ass!!). A couple from Jax, Fla. (she had never partied Candy L.-style) and I who was down for some hard core fun. I lived local and glad I did, for Candy could party you under the table. WOW!! She was present at most ISCA shows in ’82 & ’83. The ISCA show in Miami was a blast. Private concert for entrants by Paul Revere & the Raiders, free beer, Big Daddy Don Garlits doing a burn out with the Swamp Rat II in front of the Miami Beach Convention Center. Fun Fun Fun…”
Like we said: theater. And by the way, ‘theater of the mind’ is sometimes even better!

NOTE: This thread was pulled in its entirety from Dan Stoner's excellent Autoculture blog.
Please check it out and subscribe if you dig it. Autoculture
Posted by HouseOSpeed - www.HouseOSpeed.com at 10:19 PM No comments: 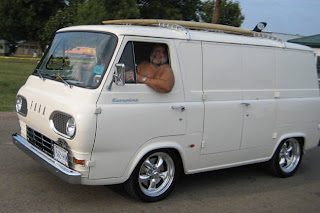 Found a nice blog with lots of great pics of this fine 8-door.
http://www.vannin.com/showvans/ford50/67californiaspecial/index.htm
Posted by HouseOSpeed - www.HouseOSpeed.com at 11:51 AM No comments: