INTRO: I’ve been a fan of Brian Morris and his van since he first sent pics of his build to Vinvanco's Facebook page. From what I’ve seen and gathered from our exchanges he's a damn great fabricator, family man and all around human. When his heavily slammed Econoline hit the streets, he officially joined the ranks of a small handful of guys who can actually drive their slammed vintage vans. I saw footage of his Econoline at speed posted on Facebook one day and was impressed.Then, Brian turned right around and built a slammed trailer to pull behind it. The next thing I heard he was on the Power Tour. Wow.

I recently asked Brian if he’d play Twelve Questions with us and he agreed. So here goes.

#1: First question, what do your sons, Max and Myles, make of your van? I know at one point you had door art with their names on your van. Have you dropped the boys off at school in it? What is the reaction from their friends? Other families? The crossing guards?


A: Max and Myles are seven and four now, and they love the van. We have affectionately named her, "The Box".  They love to ride in it, and that was part of the attraction to this van, that I could bring my family with me. I pick them up from school in it every chance I get, and the crossing guards and all of the students really get a kick out of it. We live is a small town in upstate NY, where we all know each other. My family thinks I am nuts of course, but they love the van. 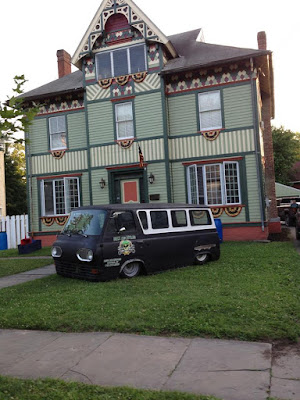 #2: I get the impression you did a lot of the work yourself. Do you own a shop or was it built at home?

A: I had great people helping me. We did all the work in my two-car garage behind my house. A lot of people who deserve credit for helping and providing inspiration. Steven Bennett is a friend of mine from Saugerties and without him, this van would not be where it is today. He had a huge hand in the design and build, and he and I sat and looked at this project for untold hours wondering what we’d gotten ourselves into. Devin Larson from Kingston came in on the last half of the build, and did some great metal fab on the things like the doghouse and the floors. Also, a gentleman named Vic who goes by Army Of Six on the Vintage Vans Forum was a great source of inspiration. I encourage anyone interested to check out his build. Fellow van owner Steve Luckett and I have become friends over the past few years as well, as we both share passion for vans, and a quest to build what most say can’t be done.  Last but not least, I have to credit VanGo, the ultimate inspiration for all of us lowered Econoline owners. 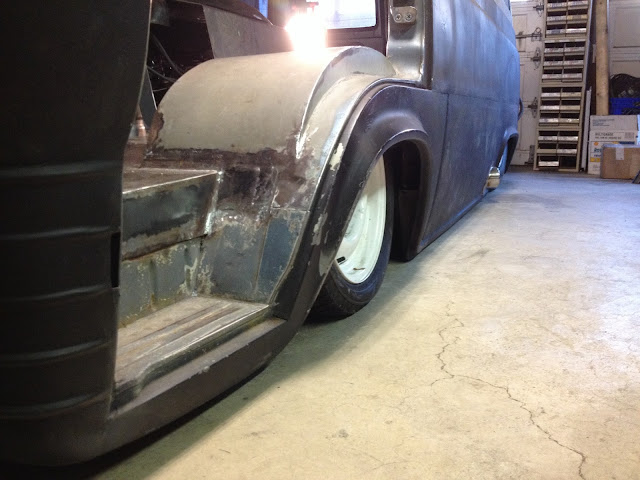 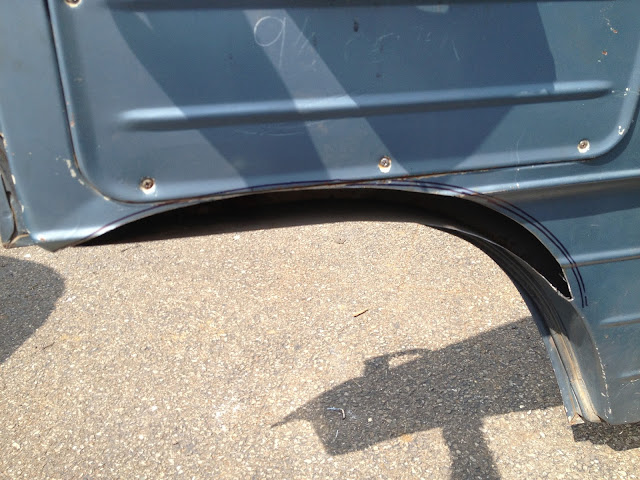 Allowing the windows to go down all the way was a big concern for me. I really wanted to keep that function. We started by cutting a channel in the bottom of the front doors as high as we could to accommodate the front tubs. So the window channel just rests along the bottom of the door. Then we tested different tires until it didn’t rub when fully aired out. Again, Steven Bennett was a huge part of getting that to work. 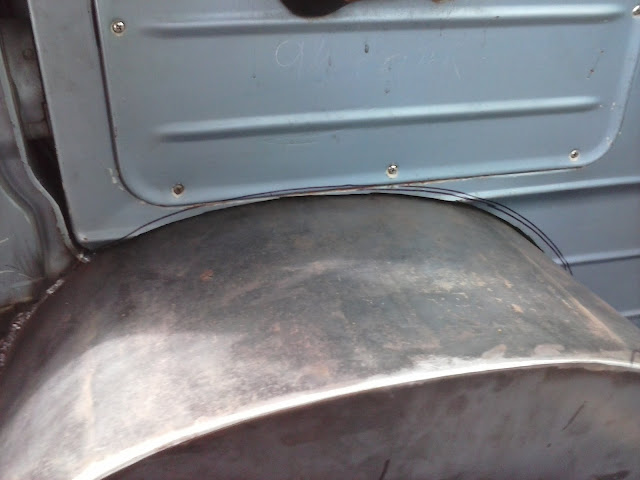 #3: You’re running a factory fuel-injected V8. Can you tell us about the setup and what the bennies are with the factory fuel infection. Was it harder to install? 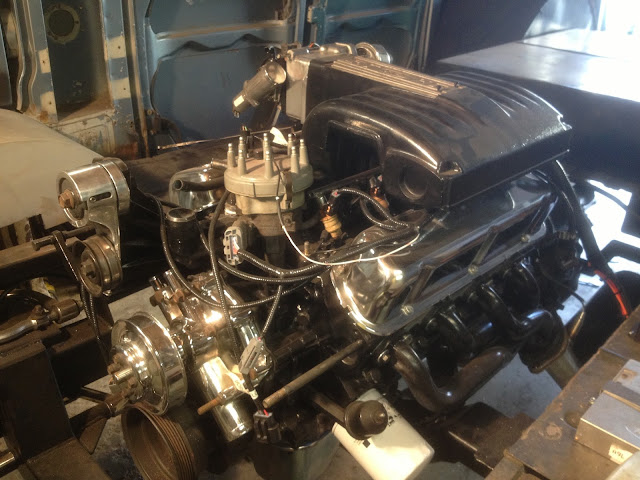 A: We used a 1993 5.0 Mustang GT engine with a A4OD auto trans. We had to move it back about 2.5 feet so that it would fit. I basically moved the motor back as far as I could until the drive shaft was about 18 inches long, the minimum possible to allow the Air Ride suspension enough travel.

Making the mounts was fairly easy, as the frame rails are straight. I used a Ford Racing wiring harness for the engine. That made that install very easy. I had to “trick” the engine into thinking it was in a Mustang, so we hooked up everything, right down to the inertia switch. I love the EFI, it runs perfect and has just the right amount of power for a street van.

#4: What are you running for a transmission? 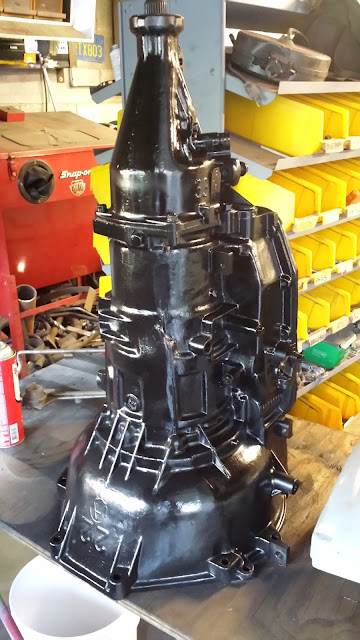 A: We went with the A4OD trans to get overdrive and allow for taller gears.

#5:Can you take us through the front suspension? What parts did you use and what had to be fabricated? What was the hardest part? 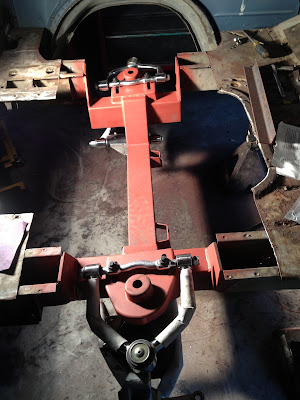 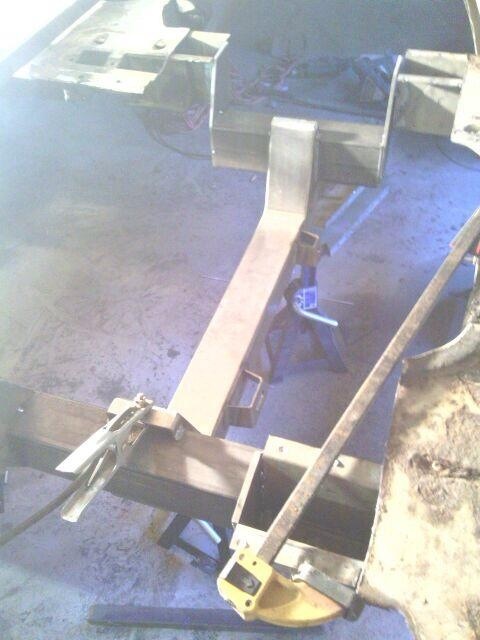 We built the sub frame for the front suspension on the bench, using rectangular steel stock to match the van's frame. The van’s frame is about 8 inches wider than the Mustang II. We then set it under there, and realized that the sub frame would have to be dropped about 4 inches to lay rocker. So we built drop brackets that would narrow that as well. The hardest part was figuring out the steering. 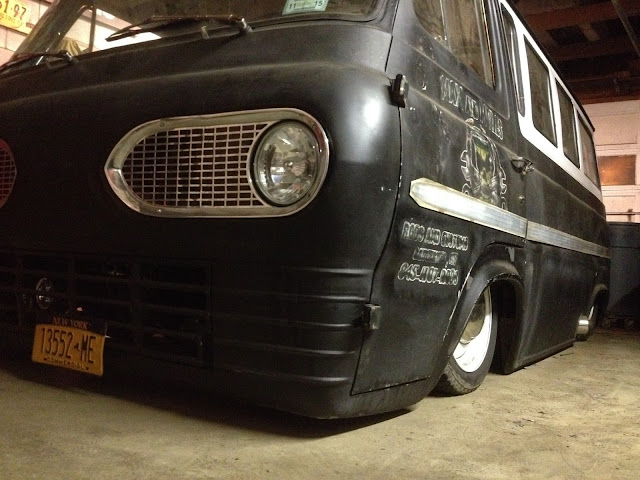 #6: What are you running out back, rear end and suspension-wise.

A: We went with a Ford 9-inch that we narrowed in my garage. It has 4:56 gears and positraction. Then, we set-up a triangulated 4-link with full Air Ride suspension. 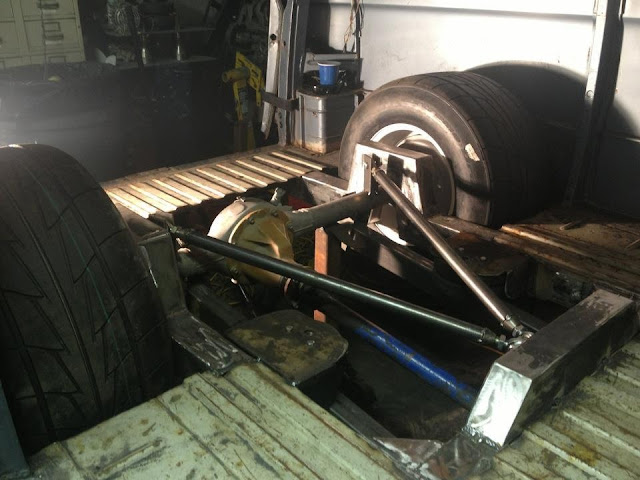 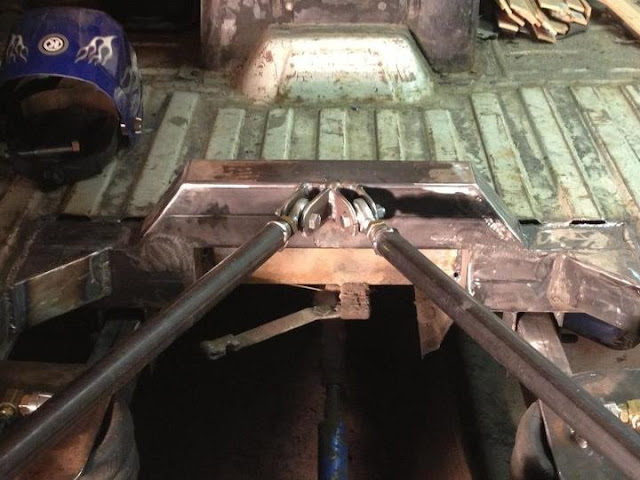 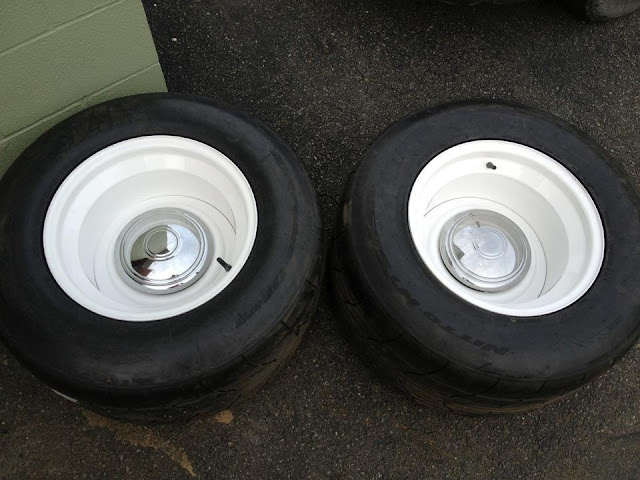 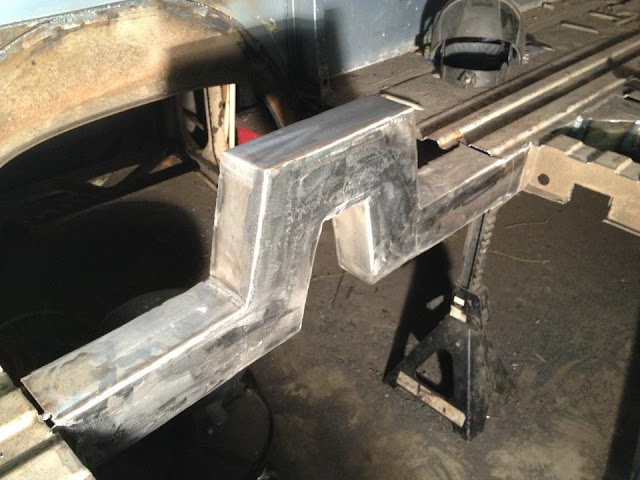 #7: What about the steering column and steering box. Steve Luckett told us you were really helpful to him in fabricating his van’s steering set-up. I take it you’re running the same set-up you turned him onto? Tell us about it, unless it’s a trade secret. 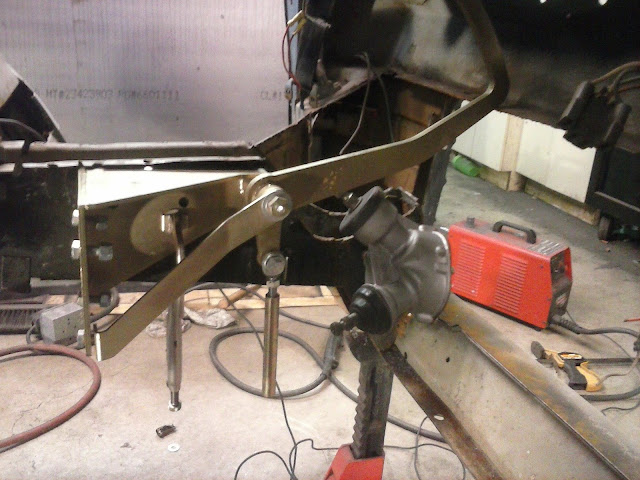 A: No trade secrets as far as I’m concerned. We're all in this together, and I applaud anyone who attempts this kind of build. As we looked, we knew that steering was going to be our biggest challenge. Usually, when putting a rack and pinion in a car that did not have it from the factory, you are sitting behind it.  I needed to be sitting in front of the rack. Why not flip the rack upside down? That’s what we did, cutting the mounts off the cross member and making new ones to work upside down.

This is where Army of Six Vic from the Vintage Vans site was a big help. He’d used an Isuzu Amigo Steering box that is just a 90 degree in and out, with 1-to-1 ratio. That info was a lifesaver. I was able to cut the bottom of my steering column off and put a small bearing in it. Then I was able to use Borgeson joints to connect the Isuzu box, then some more joints to connect to the rack and pinion. It works perfectly. 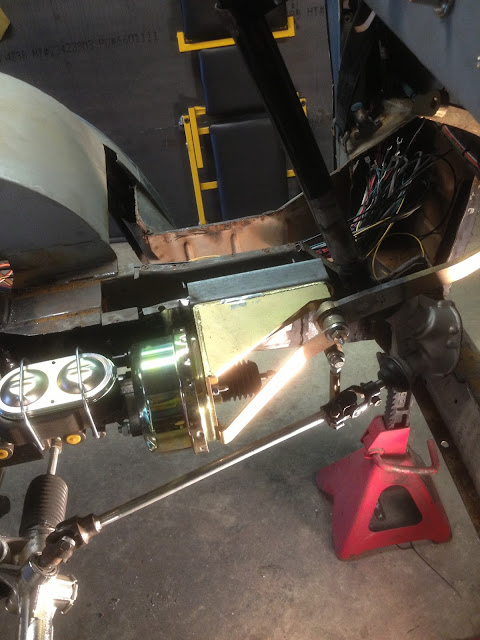 #8: Didn’t you originally intend to make your Econoline like a Country Squire with wood inserts? What became of that plan? 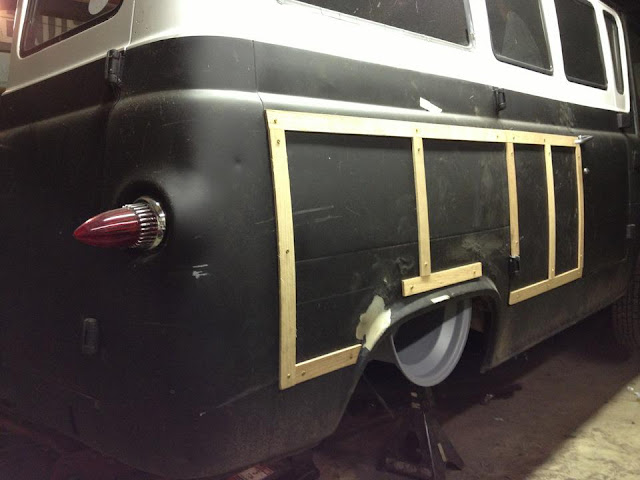 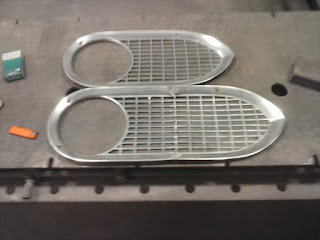 A: I did start out with plans of wood paneling on the sides like a Woody, but as the build evolved, it didn’t find its way to the final vision. I have a few rolls of wood car wrap in anyone is interested! [EDITOR: IN THE SPIRIT OF SHOWING A FEW MODS THAT DID MAKE THE CUT, I'VE INSERTED THE NEXT FEW SHOTS WITH CAPTIONS.] 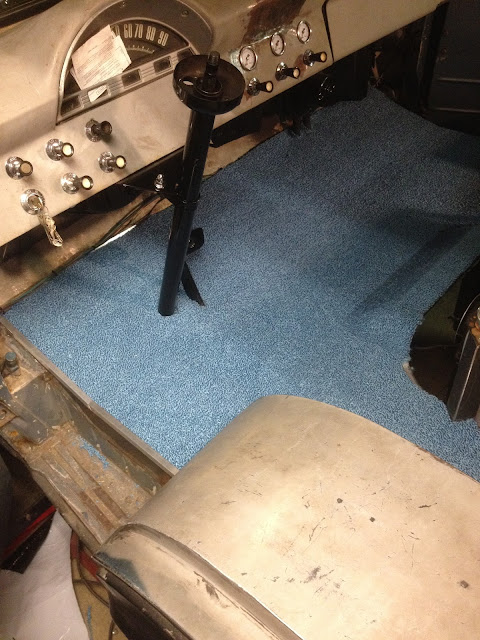 #9: I saw some interior shots with carpet and upholstery. It looks very nice and super functional. Where or what are the seats from? Did you do a lot of insulating of the doghouse and the interior? 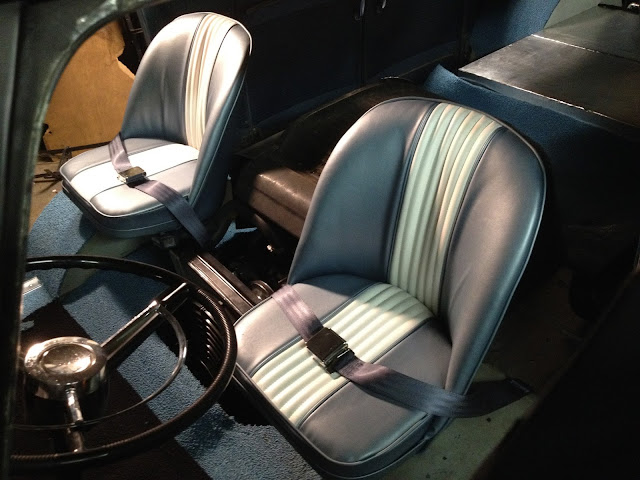 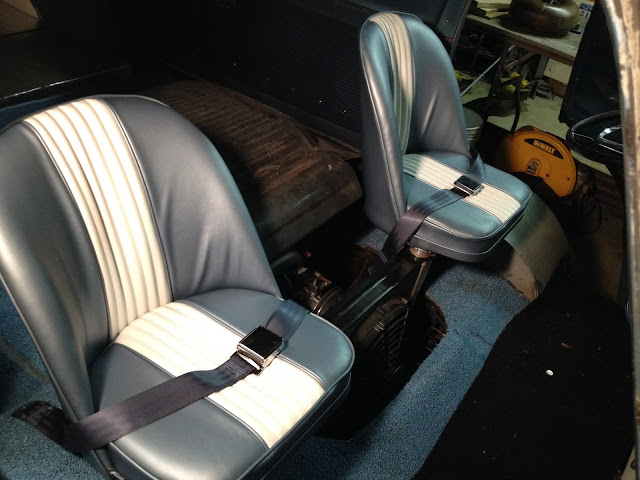 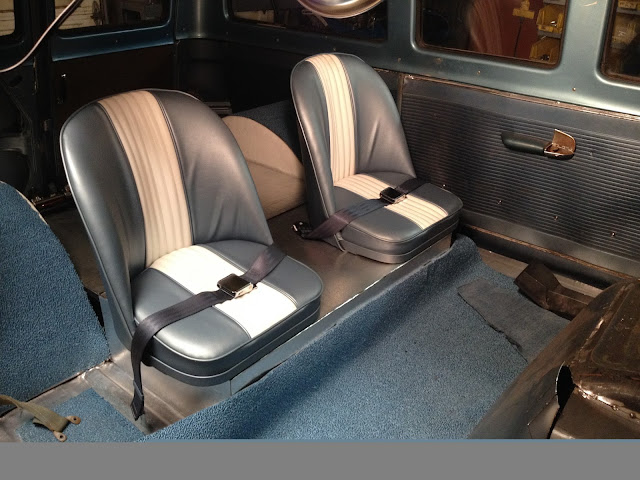 A: I ordered the seats custom from a guy in Ohio. He built the four for me. I really just wanted it to be functional for me and my kids. We had to have the seats custom made because after the body drop, I needed the head room. Had to have seats with just 2 inches of seating cushion. I built the rest of the interior myself, did the carpet, the door panels, and I’ll be getting to the headliner this winter.  The doghouse was a fabricated by my buddy Devon Larson. 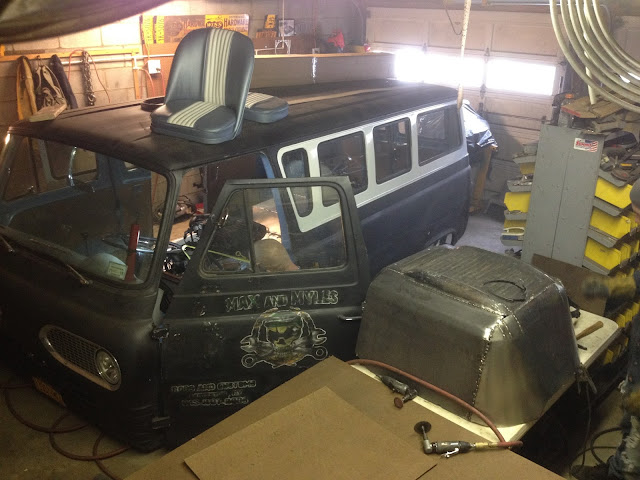 #10: We’re starting to get towards question twelve and I want to ask about the trailer. Tell us about its build. Did you sleep in the trailer during Hot rod Power Tour? How was it? 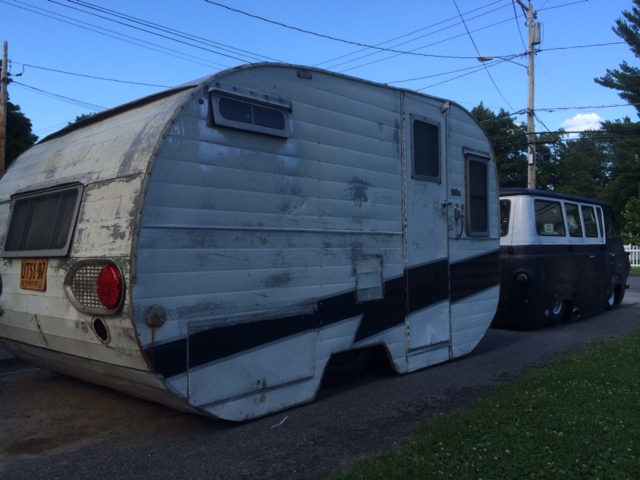 A: I picked up a 1957 Mercury Travel trailer. It was about 14 feet long when I got it. When I put it behind the van, it looked way out of proportion, too tall and long. 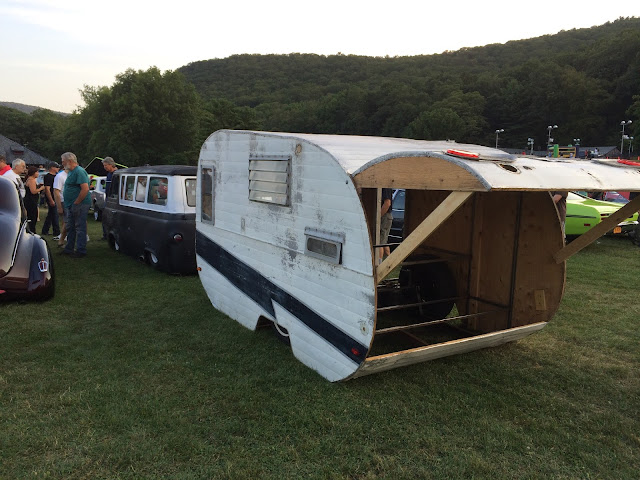 I took it apart down to the frame and built new walls, and a rear cargo door so I could transport my kids' pedal cars and bikes to the shows. I shortened it about three feet in length, chopped it 10", and channeled it another 4". Then I built a 4-link for it and bagged it with the controls inside the van. I didn’t sleep in the trailer on the Hot Rod Power Tour. It’s set up more as a cargo trailer. 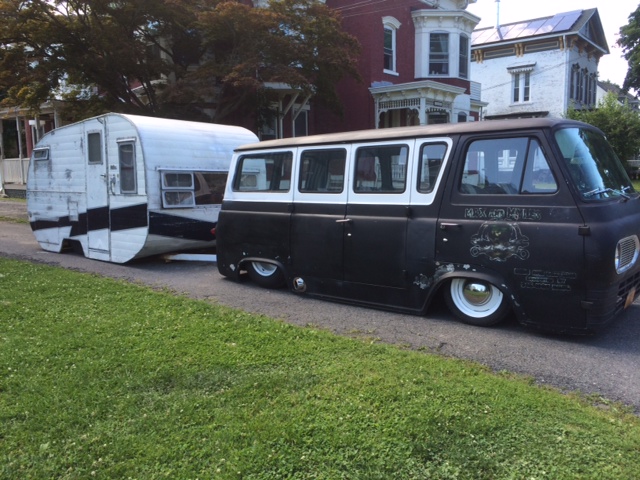 #11: What leg of the Hot Rod Power Tour did you drive and how was the experience?

A: I started in Illinois, and made two stops on the Power Tour down to Memphis. It was an experience I'll never forget, and I encourage any hot rodder to do a Power Tour. I’m planning to go again this year. 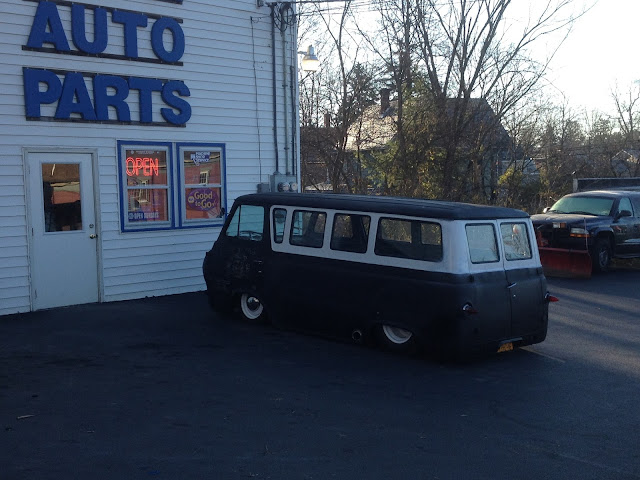 #11: Is there anyone you’d like to give credit to or plug, yourself included? This is the part where you mention if you’re available for hire to help others build their project vans.

A: There are so many guys that deserve credit. First and foremost, my Dad, Paul Morris, who taught me from an early age that I could do anything. His famous saying is "Most people will talk about doing things, if you want to be different, do those things most people talk about." Vic Army of Six was a huge help. Steven Bennett had as much passion as I did for this project and treated it as his own. He’s a talented builder, and I was lucky to have his help. Devin Larson also played a great part in completing the van. I guess if I deserve credit it's for having the courage to start this build when so many have started and ultimately ended up sitting in a garage unfinished. And then there’s Steve Luckett, who will for sure have his van on the road soon. I hope to cruise alongside him in his van someday.
As far as other builds go, I’m happy to help anyone who has questions. I think we all should share our trials and tribulations as we build our vans. That’s what Hot Rodding it all about. Thanks a lot for keeping the vanning community going. 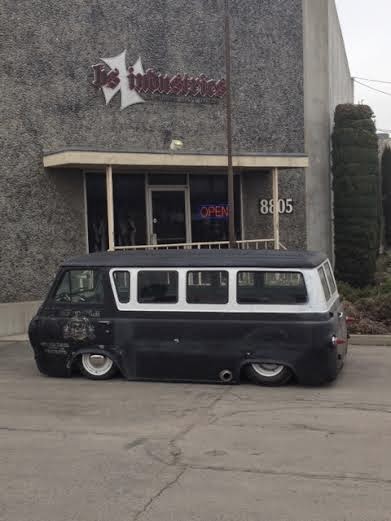 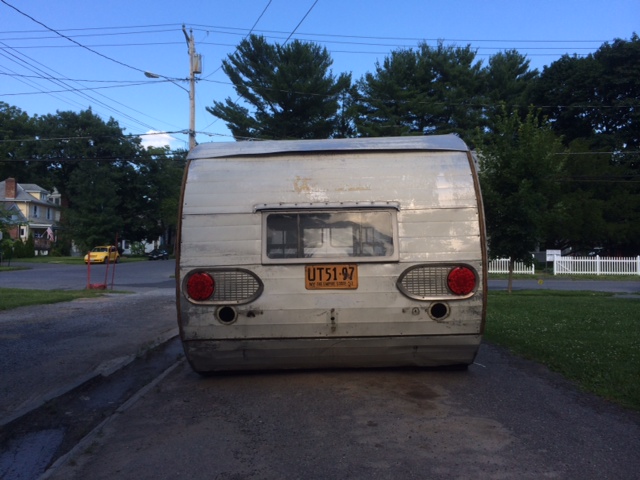 CONCLUSION: It’s guys like Brian who make vanning great and push the rest of us forward. His willingness to share the details of his build with other vanners can only lead to more lowered vintage vans finding their way back to the roads.You can check out more of Brian's inspiring work via his Instagram feed at @Hauntrod. If you or somebody you know is deep in the throes of building a killer early van or has recently finished one, feel free to contact us about a potential Vinvanco Twelve Questions feature. Until then, keep the boxy side up!