I: How did you convince your Shiner client to build a beer van?

BRIAN/JOHN: The van idea was one piece of the puzzle for launching Shiner Premium back into the market. Shiner Premium is the beer that put Shiner on the map and it did so in the early 1970s amidst a groovy music scene that was goin' down in Austin at the legendary Armadillo World Headquarters and other local venues. We wanted to pay tribute to those places, that period, and the overall vibe in everything we did. We pitched the van as a rolling billboard for Shiner launch events, showing our client examples of vintage van lifestyle imagery online. Dudes and chicks laying around on the beach. Chopper bikes parked next to vans at campsites. Bikini clad babes laying in the grass. Airbrushed murals, bell bottom pants, thick mustaches, etc.

II: What was the client's reaction to the idea?

BRIAN/JOHN: We rolled into the meeting thinking that the van was an easy thing for a client to say “no” to. They could’ve easily spent their dough on other aspects of the launch. But Shiner's smart, they have guts and they could see how the van would play a cohesive part in the relaunch of Shiner Premium. They dug it.

III: What does Shiner think of the finished product?

BRIAN/JOHN: They love it and are always willing to help put promotional miles on it. 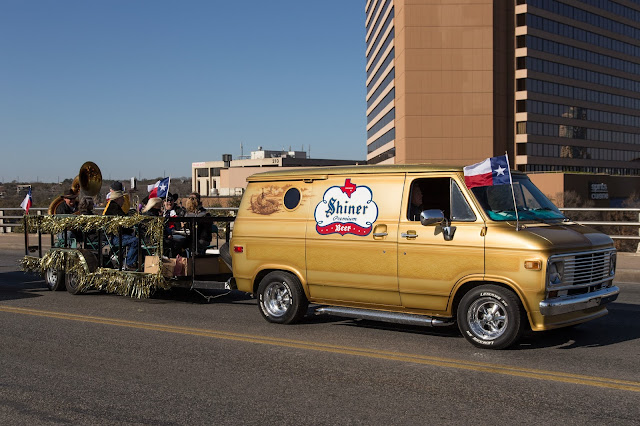 IV: What did the van look like before the transformation and where did you find it?

BRIAN/JOHN:After a lot of searching, we found it on craigslist in Des Moines. The exterior was blue, pretty simple. But it had a couple of things going for it right from the get go. The Cragar SS mags were already on it as were the vintage portholes. It was a good basis for what we had in mind.

V: What did you have in mind?

BRIAN/JOHN: We’d originally planned to paint a mural of the Shiner Brewery on the van. But after a walk around the van with Bryan Jessee (one of the head-honchos at our agency) we were encouraged to consider “an eagle flying with two beers in its talons.” That’s creative direction that you don’t get very often and we flat out loved the idea. 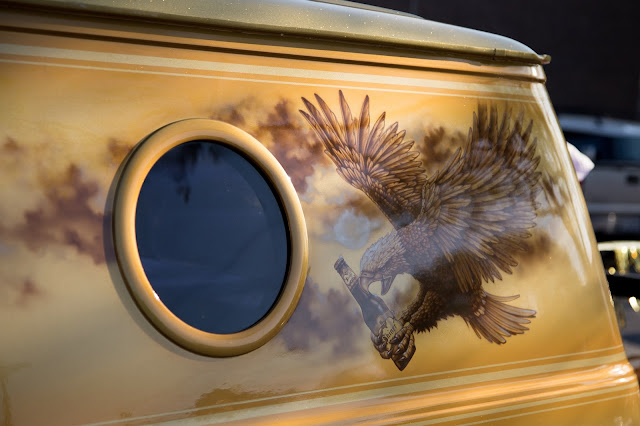 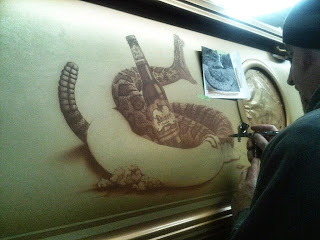 We hired Darren Wenzel of Gasoline Art to airbrush the murals and they turned out incredible. We rounded out the eagle motif with a rattlesnake on the opposite side of the van.

VI: Who else was involved in the build?

BRIAN/JOHN:Josh Rodriguez of Rodriguez Rod and Cycle did the majority of the work for us, including the paint job. And he did it right and fast. In fact, the paint was barely dry when we rolled it out on a sandy beach for a photo shoot for our print ad.

VII: What has the general public's response been?

BRIAN/JOHN: It’s a head-turner. Everywhere we go, people snap pictures of it, or ask about it. It’s hard to miss something so big and gold. 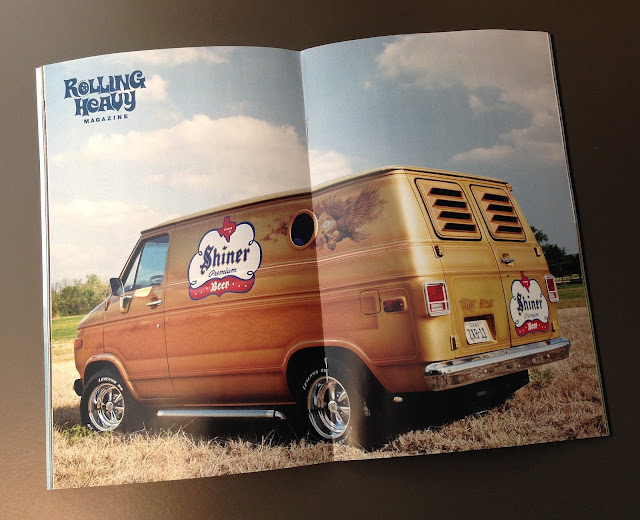 VIII: You were contacted to have the van appear in Rolling Heavy. Seeing as it's not the most politically correct van magazine out there, how was that broached to your client?

BRIAN/JOHN:After initially talking to Matt at Rolling Heavy, it was clear to us that he was leading the push for the custom van resurgence. While his publication is the real deal and a little racy, we nonetheless thought it would be good publicity for Shiner. So we asked Shiner, figuring the worst they could do was say "no". After two times of them saying “yes”, we sent a scan of one of the photo spreads in the actual mag, just to be safe. After the third “yes”, we were good to go.

IX: What is a typical day in the life of the Shiner Van?

BRIAN/JOHN:The van lives at the agency in Austin and in addition to lots of local music/film/beer events, we’ve driven it in parades, on Shiner sales calls, and just to lunch. It also followed the cyclists from Austin to Shiner in the 90+mile Shiner Gasp race. 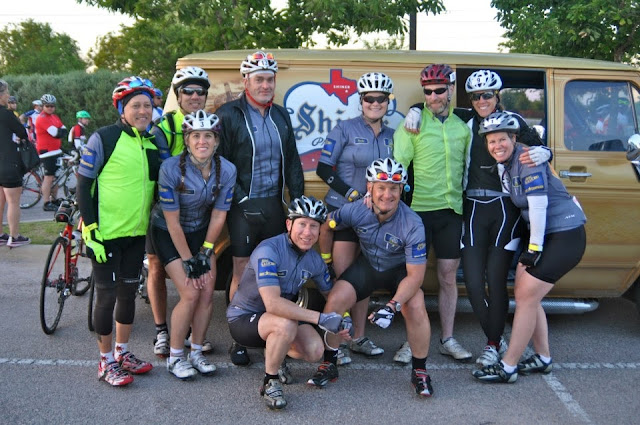 JT: I took the van out one day at lunch and when I got to the exit of our parking garage, the Austin Beerworks van was right in front of me. I nudged up close and let the side pipes do a little trash talkin’.
BJ: As with any older vehicle, it’s a continuous work in progress. We’re proud of where the van is currently, but are excited to keep customizing it. We haven’t touched the interior yet, but are formulating an approach to that now. That’ll be Phase II, hopefully coming soon.

XI: You’re both gearheads. Before I let you go, tell us a bit about your own projects.

Brian: I’ve got a Fleetside 1959 Chevrolet Apache that I’m just now getting back on the road after a 17-year hiatus. I drove the truck in high school but since then it sat under a tree at my parents place. It’s a great old truck and a fun project to have back in my life.

John: I have a 1955 Buick Special that’s mostly all original except it sits a little lower and is all shaved and clean (see it at the 1:30 mark of the Hill Country Cruise video embedded in the next section). I'm also getting underway on a Buick-powered ’27 Ford roadster project. That should just about cover slow and low and fast and loud.

XII: You guys are ad dudes. It only seems fitting that I ask you if there's anything or anyone either of you'd like to put in a plug for?

Brian: Sure! You can check out the band that I’m in, The Cold Irons. If you dig back on our timeline a bit you’ll see a post about some tracks we did recently as a father’s day gift to Steve Earle, one of our heroes. If you search “The Cold Irons” in the iTunes store, we’ll come up in there, too.

John: If you’re in Texas, check out the Meatheads. We're a car club that shares a love of oak-smoked bbq and all things hopped up. Bring a van out for one of our Hill Country cruises. 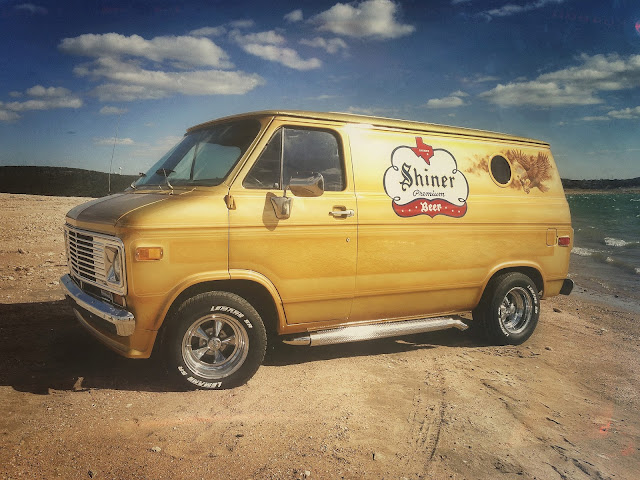 Thanks for playing twelve questions with Vinvanco, fellas. Be sure and send us some shots once the interior comes together and keep up the good work on Shiner Beer at McGarrah Jessee.

If you're a vintage van lover, check out our vintage van merch at Vinvanco.com and like our Facebook page.
Posted by HouseOSpeed - www.HouseOSpeed.com at 11:20 PM 1 comment: