Twelve Questions with Steven D. Cinnamon and the Trash Van

INTRO: If you spend any time at all around vintage Econolines, you’ve probably seen the name Steven D. Cinnamon and his very cool first-generation Econoline van. We asked Steven if he’d play Twelve Questions with us and share the story behind his nice and clean green machine affectionately known as  “The Trash Van”. 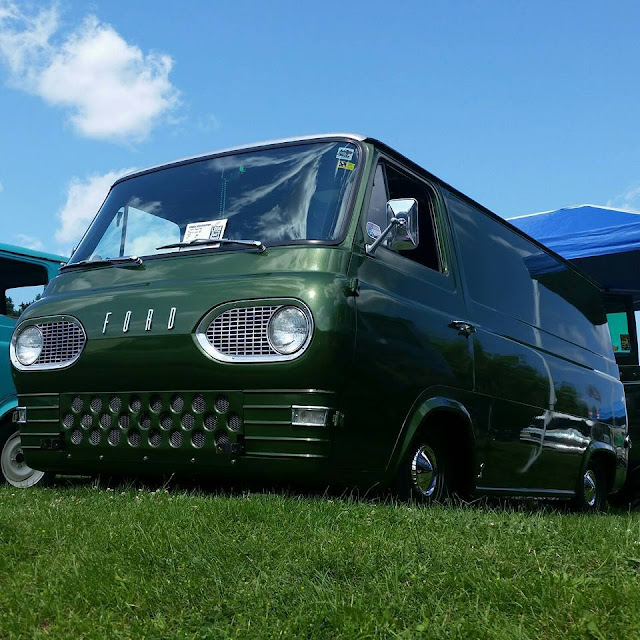 1. You're a fixture amongst the East coast van community and clearly have an affinity for Econolines and it seems to be something the whole family shares. How did it start for you?

I just dig the old Econolines. I'm not discounting GM and Dodge I just don't own any.
My son Steven had an Econoline, a deluxe Falcon Club Wagon. Nice piece. He's sorry he sold it and regrets doing so. My daughter Allison owns the Ford Freeway Flyer. My grandfather bought a new 67 Econoline Deluxe Club Wagon. I have pics of it and I think that started my obsession way back then. 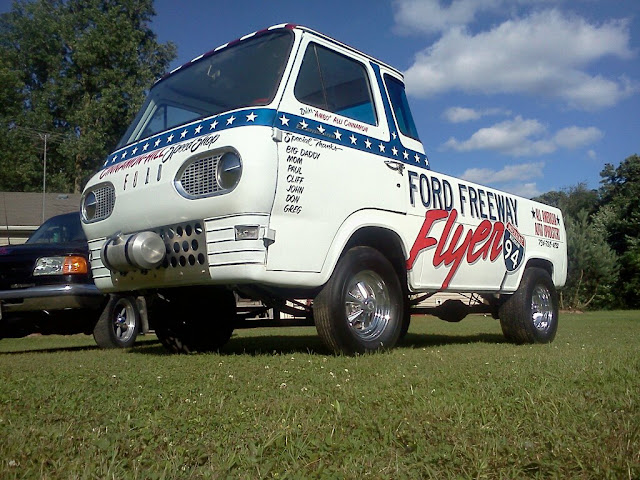 2. Being that your area of the country has its challenges when it comes to old metal, how does that affect you and your car loving pals?

I have been blessed with three good Econolines, and all I have been pretty clean. I've never started with rusty junk on any build I've ever done for myself. It pays to wait and find a decent one to start with. Other friends with bigger pockets then I have started with far worse. 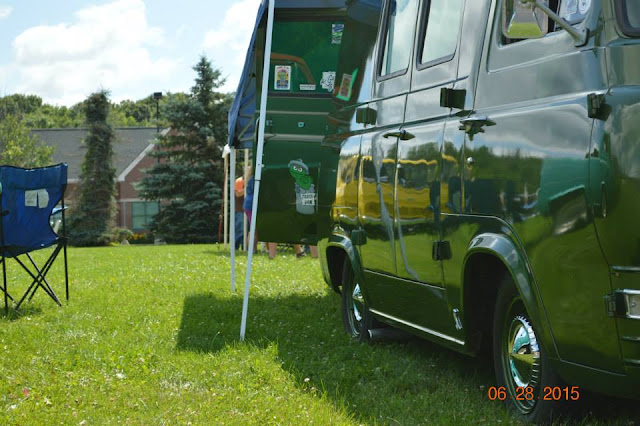 3. What's the story behind your Trash Van? Where did you find it and what condition was it in? Did Trash Van come from your neck of the woods?

Funny, Trash Van found me. It's kind of a long story. I had Sideshow Freak at the Detroit Autorama Extreme and a guy was crawling under taking pictures. I asked if I could help him, and he said he was restoring a '63 Econoline and wanted to put a V8 in it and was admiring my work. As he was showing me pictures of his Econoline, I saw a picture of a white one and asked him if that was what he started with. "No", he said, "that's my parts van that I'm pretty much done with". So, I went and looked at it a few weeks later and I struck a deal to trade the drive line out of Sideshow Freak for his parts van, and the rest is history. I ended up installing the V8 in his van too. Trash Van was originally a California (Pacific Bell) van so it's not bad at all.

4. It’s relatively easy to emulate what everyone else is doing with their vans. Trash Van seems to have followed a different path. Take the wheels and tires, for instance. What size are they and what are the reasons for the combo you’re currently running? I think I’ve seen shots of your van with a different wheel combo. Is that my imagination or do you have a second sets of wheels and tires?

I've always had and been gravitated towards different cars, trucks and vans. And I like to make my rides stand out. My current wheels are the original 13 inchers that came on it. I had planned to run the American Racing Torque Thrusts with red line tires I had on it before it was lowered but they were too big. So as they say, I decided to run what I had. I had the caps chromed and really like to look. I'm putting wide whitewalls and chrome steelies on it now. Shh, that's a secret.
[EDITOR: OOooops!] 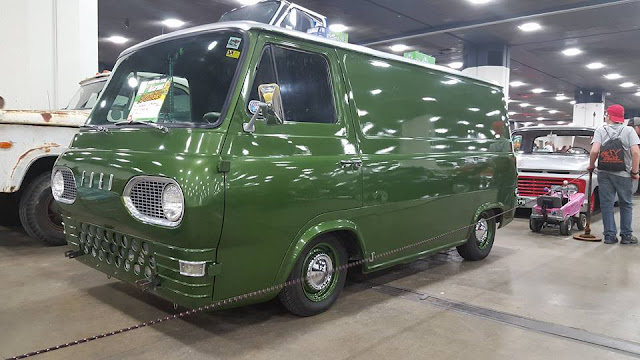 5. I’m a fan of the punched front grill that you’re running. How did you come up with it? Have you given any thought to marketing it to other Econoline owners? If so, where do I sign up?

That's an aluminum grill. We made two. One is in the Ford Freeway Flyer but, we didn't dimple die that one. The one on Trash Van is, and what a job it was to do it. Three days of warpage and my arms looked like Popeye when I was done. I offered to have some made but there wasn't much response back then. Now a lot of people want them after seeing it. My buddy sold his Fab shop since and now I have no way to make them. I was thinking of asking SpeedCult Detroit to make another for Sideshow Freak. 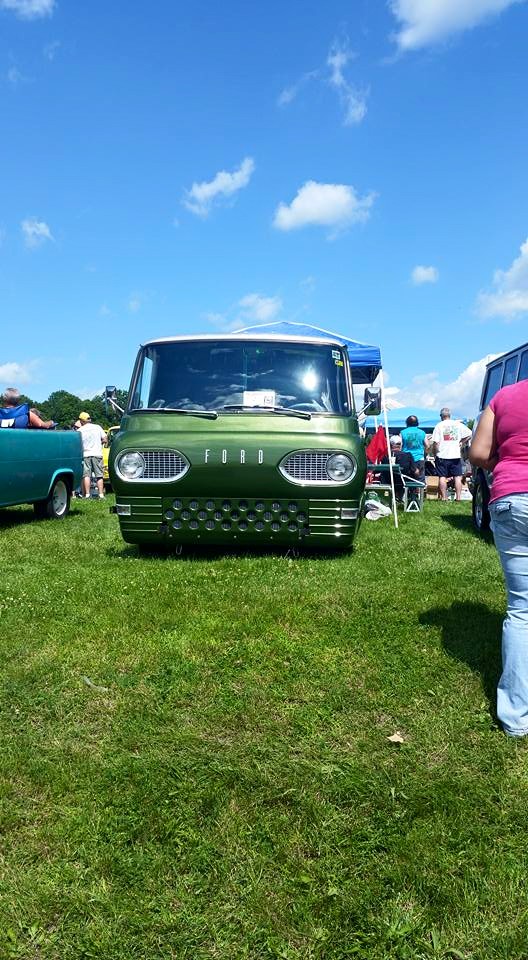 6. Is there anyone you’d like to give a shout out to for helping you make the Trash Van a reality?

Sure, my son Steven and my wife’s stepfather, Mike, did the bodywork and paint. Everything else is a work in progress. And I'd like to thank my wife for always being there and kinda supporting my obsessions. I have a bunch!

7. I don’t know that I’ve ever seen pictures of Trash Van’s engine compartment. What drivetrain are you currently running and do you have plans to change it? 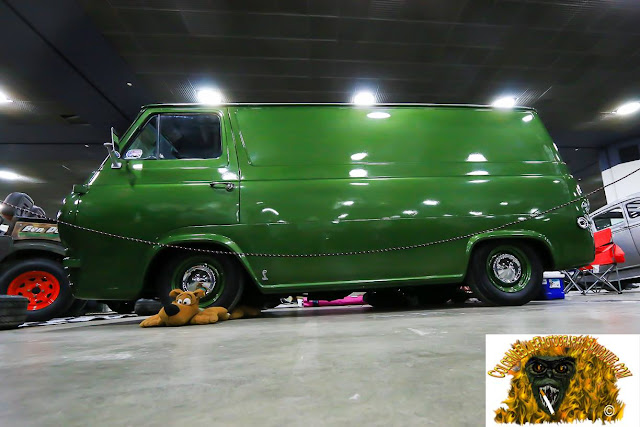 8. How did you go about achieving the Trash van’s ride height? How does it handle? Is there anything you’d change?

I'll give a shout out to Tim Brogan, Econo Parts USA in Kentucky for the suspension. He came up with an awesome heavy duty front flip kit that I bought. The rear axle saddles I got from the trailer supply store. The rear shocks ended up being the front shocks now. I measured and came up with heavy duty truck shocks for the rear. If I had the cash, patience and time, I’d build it like Steve Luckett’s or Brian Morris’s Econolines. Maybe the next one. 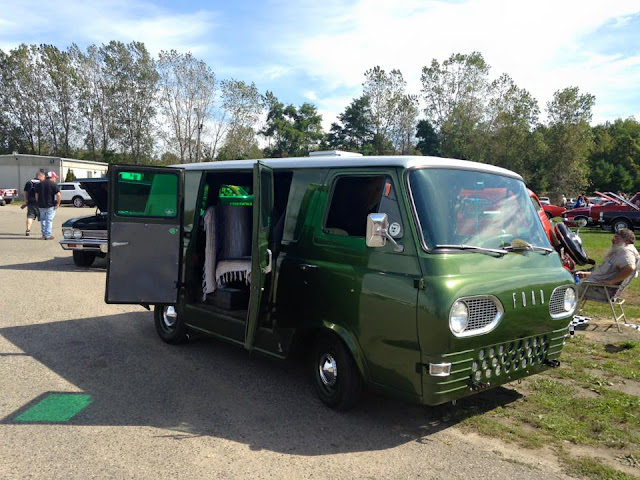 9. What about Trash Van’s interior. Is it a work in progress? Do you have plans for the interior?
Don’t worry, we’ll only tell everyone.

As far as the inside, it's nothing! I've insulated the walls and ceiling and I did make a pattern to do the walls in thin plywood and I want to cover it with 50s, 60s,and 70s Hot Rod Magazine pics, then clear over that. I like for kids and adults to get inside and check it out that shows. I especially like having them sit behind the steering wheel since not many people have done that who are younger than me.

10. Did you pick the paint color or did Trash Van come to you Oscar-colored?

I did pick the color. When I got it, it was a cream color. I was going to leave it because I was going to use it for swap meets and hauling stuff but then it took a whole different route. I felt that it deserved a second chance. My dad bought a new 1972 Ford Thunderbird that was the exact color that Trash Van is now.  IT's known as Ivy Bronze or Green Fire Mist Metallic depending what book you look in. I remember telling him that I really liked the color and some day I'd have a car that color. So I chose it 40 years later. Trash Van was originally Ma Bell green so it was already green on the inside.

11. What advice do you have for someone trying to get a vintage Econoline on the road and wanting to keep it there?

Just do it as they say! I've never ran into anyone that didn't like them. Even if they didn't quite know what it was.  I belong to a great group of like-minded people who are all about helping each other out. Check out our Facebook site. It’s 61-67 Econolines. A bunch of great guys with ideas, photos of builds, stuff for sale, and great Q&A. 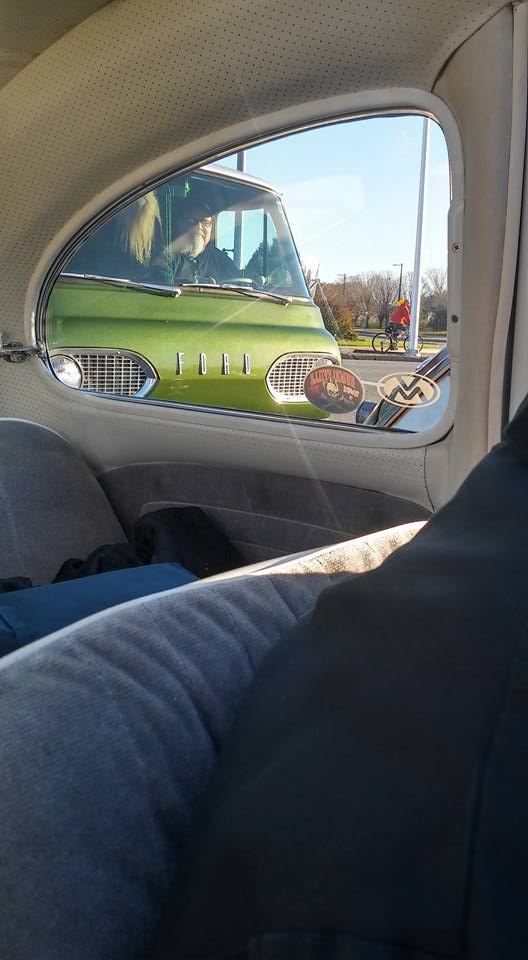 12. If you could magically own any van besides yours, but couldn’t change a thing or ever sell it, whose van would you own and why?

It would be very hard to choose between Coby Gewertz's "Van Go", Brian Morris' "The Box") or Steve Luckett’s "The Creeper". The only one I've seen in person is Steve’s. There are pictures of Creeper and Trash Van parked next to each other at the last Bakers of Milford show.

And with that, we’ve reached the end of another Twelve Questions and met yet another vintage van friend. Let's take a moment to thank Steve and his family for taking the time to provide us the details and images of Trash Van.  To help support  our efforts, feel free to check out our website and stock up on some vintage van swag.

Until next installment, keep the boxy side up.